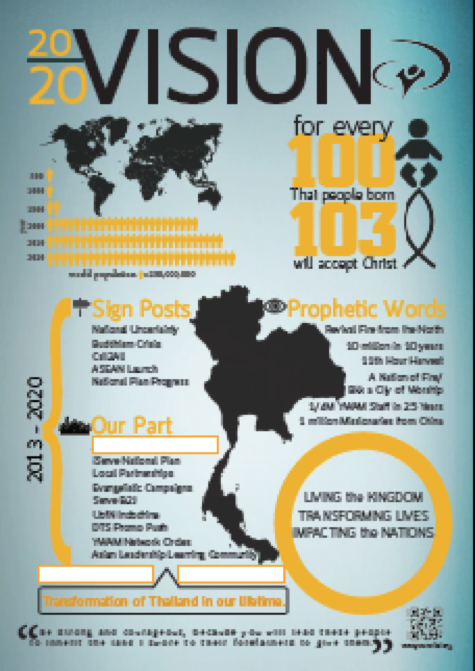 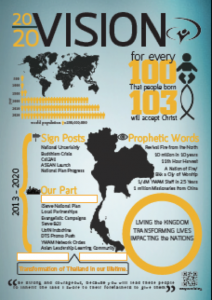 I once read that most leaders don’t take the time to plan 10-20 years in advance. But of the few who do, most of them assume that the state of the world then will be the same as it is today, without factoring in potential changes that will affect those plans. Dr. Patrick Dixon, author of “The Future of (Almost) Everything”, reminds us to “Take hold of the future or the future will take hold of you. You may have the greatest strategy on the planet, but if the world changes unexpectedly, you just travel even faster in the wrong direction.”

In my attempt to lead YWAM Thailand well, I began seeking God about priorities and what to focus on. This eventually led to a 3-part template that continues to guide my decision-making. Those 3 elements include “Signposts”, “Prophetic Words” and “Our Part”.

Signposts are the things we can observe that represent our present reality and may point to an opportunity or something God is doing. They may include a political situation, economic developments, the state of the church, etc.

Prophetic words refer to those key prophetic words regarding our nation or city, or our mission, which have been repeated or highlighted, but are still waiting to be fulfilled.

And then there’s “our part”. Based on the signposts we are observing and the key prophetic words, what is OUR part in seeing God’s plans fulfilled? Landa Cope reminds us in her book, “The Old Testament Template”,”Jesus . . . did not think that everything was his responsibility. He knew what the Father had sent him to do, and he knew when he had completed it. We can learn much from this in our own lives and callings. What has God called us to do?”

By paying attention to these three factors, and reviewing them periodically, it can help us to stay focused on the priorities God has for us during this season of our leadership.

We can see an example of this in the story of Joseph in Egypt interpreting Pharoah’s dreams. (Genesis 41) The signposts were three-fold: Pharaoh, although the supreme ruler, was deeply troubled by his dreams and needed a wise advisor. Joseph, a prisoner, had proven his prophetic gift and his faith in the midst of trials. And a cupbearer, who knew Joseph from prison, had now gained the trust of Pharaoh. The prophetic words came in the form of Pharoah’s troubling dreams – 7 years of plenty plus 7 years of famine – but also in Joseph’s dream years before of his brothers bowing down to him. Joseph’s part in co-laboring with God then became to create a 14-year plan for the entire nation, using the authority and opportunity he had been given. This required storing grain, forming a national distribution system, and preparing well in advance for a situation that would look very different from what anyone could see presently.

Joseph could have used his new leadership influence to attempt many great things. But he recognized that his number one priority was to use his gifts and trust in God to develop and follow through a 14-year plan to save Egypt, and neighboring nations, from famine. Otherwise, the other things God wanted to do in Egypt, and for Israel, could not be accomplished.

Take a moment to consider your nation, your city and your ministry:

May you be surprised with new clarity and strengthened in faith to pursue the long-term strategies God has for you and those you lead.