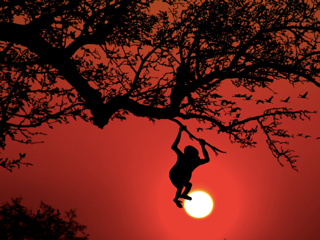 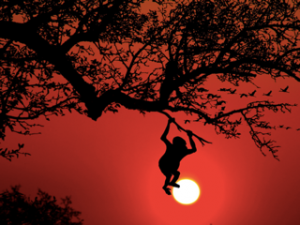 In the book Cross Cultural Connections, Duane Elmer tells a story of a typhoon and the responses of a monkey and a fish in order to save their lives. The monkey found a safe place to wait until the raging waters stopped, while sitting there the monkey saw the fish swimming against the current and being kind-hearted tried to save the fish. The monkey snatched the fish from the water and brought it back to the safe shelter on dry ground. At first the fish was very excited and then it eventually settled down to a peaceful rest.

The monkey was satisfied with how he successfully saved another creature that was endangered and considered himself courageous, noble and having a great heart. His lack of understanding caused him to assume that what was dangerous for him was dangerous for the fish and this actually ruined everything. Because the monkey could only see the worldview through his own lenses of life it caused him to make decisions that were detrimental for the fish. The end result was that the monkey caused more damage than good.

As Christians in cross-cultural missions we can easily be like the monkey who is trying to help the fish, but in the end because we do not recognize our own worldview, we think we have saved the fish, but in actuality we have caused more damage.

As a missionary I often dissect the worldview of the people group that I am reaching out too with the love of Jesus, in order to be most effective. This is wisdom for all that would work cross-culturally. Unfortunately, I recognize that for most of us, including myself, we live in great contradiction because we have never actually sat down to dissect the brokenness of our own worldview. We quickly identify all the differences of other cultures, the strengths, weakness, beauty and brokenness. But we rarely are able to see this clearly about our own cultures and ourselves because our worldview is so ingrained in us. Our worldview or our “monkey-ness” tends to be such a part of us that we often don’t even realize how much it deeply affects us. It is like a pair of contacts that has permanently been implanted into our eyes, shapes how we see every day and yet it never crosses our mind to take them out and get God’s perspective.

Globalization is very real today and it is affecting every culture’s worldview, whether they like it or not. As missionaries or indigenous leaders, we have to realize that for us to have God’s worldview we must recognize that we are in a battle for what we believe. We are constantly bombarded by a secular worldview through almost every means possible: media, technology, entertainment, academia, whether Hollywood or Bollywood, Facebook or Instagram… you name it and it most likely bombards you with an un-Biblical worldview.

For thousands of years most people grew up in one location with no access to travel, information or exposure outside of their immediate hometown. Because of this, their worldview was very controlled simply because of the consistency and simplicity of their world. Therefore their worldview tended to be very limited and unchanging.

In our world today for the monkey and the fish the battle over our worldview has the potential to be much more broad and yet it is much more complex. Think about how over the last decade the internet and smartphones has impacted our worldview. Fifty years ago a parent would be primarily influencing their child by teaching them almost everything. Now the internet and devices typically have superseded in teaching, training and shaping our children’s worldviews.

In today’s world we are a generation that is inundated with more information through technology than ever before. In our battle of belief for a Gospel worldview, both monkeys and fish must be deeply grounded in our Bibles, so that it becomes a grid and the lenses in which we filter the rest of the world.

Both the monkey and the fish must realize that their worldview is not perfectly correct but is inherently broken. They must take off their lenses and choose to take on the Creator’s lenses to see His truth for both the monkey, the fish and the rest of creation. The Gospel alone restores our broken worldview and the Gospel alone can restore our broken world. To put our hope in anything else to restore the world is simply an un-Biblical worldview that puts hope in something or someone that cannot deliver.

For centuries the world has hoped that more education, technology and development will restore our world. But the more educated our world is, the more technology we have and the more advances in development we take, the more our world is unraveling from the inside out. When we look to ourselves to restore the world it falls apart, but when we look to the Creator of the world and apply His truths to our worldview, His worldview restores everything to being beautiful again.

*For more resources from the ALLC on the topic of Biblical Worldview click here.