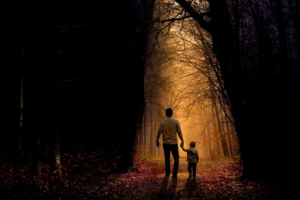 “For those who are led by the Spirit are the sons and daughters of God.” – Romans 8:14

Do I think I am smarter than God?

On the cross Jesus conquers Satan, sin and death to take us from being slaves of sin to sons of the King. In Romans 8 Paul says one of the marks of us being sons of the King is that we are led by the King’s Spirit. As son’s of the King we need to be constantly asking ourselves, am I being led by His Spirit?

None of us would say out loud that we think that we are smarter than the King, but most often the way we live our lives reflects our tendency and propensity towards trusting ourselves more than we trust Him. We can often start out with a decision, plan, or strategy by looking to God for direction, but it is so easy to replace allowing God’s Spirit to lead and start leading ourselves.

Son to Slave: Spirit-Led to Flesh-Led in 1.2 Seconds

Paul clarifies that the flesh leads slaves, but sons learn to be led by the Spirit. In Matthew 13 Jesus takes the disciples to Caesarea Philippi, which was the most pagan place in the area and then He asks them this question… “Who do you say that I am?”

Jesus knew this was the most important and foundational question of every human’s life because it will determine how he or she live their life, and who will actually lead their life. Peter was always trying to be the best and brightest disciple and so he answers first, rightly proclaiming Jesus as the Son of God and Messiah. Peter finally got a question right, he nailed it and this is finally his moment in the spotlight.  Jesus praises him, saying this was revelation from God, or in other words Peter was being Spirit-Led.

Interestingly Matthew records only a few sentences later, most likely seconds, no more than a few minutes later, Peter is no longer being led by the Spirit. After Jesus says that He will go to the cross, Peter says “No Lord.” (Just a note here: those two words should never go together, No Lord.  If they do you are definitely not being Spirit-led.)

Jesus turns to Peter and says “get behind me Satan.” In other words, Peter you are no longer being led by the Spirit, you have turned back to your slavery and are being led the enemy. Have you experienced this type of Peter moment? “Led by the Spirit” changes to “led by the flesh” in 1.2 seconds?

I know I certainly have. Even when I am intentionally wanting to be Spirit-Led, but within seconds I can be led by my own thoughts. Peter went from getting revelation from God to reprimanding God, in other words he thought he was smarter than God. He didn’t say it but his actions showed it. For most of us our actions daily show that we tend to like our ideas more than God’s, and so like Peter we live lives that reflect that we actually think we are smarter than God. Even if we would never say this out loud or admit it, actions actually reveal our true beliefs.

The good news is that Peter continued to grow in this process of letting the Spirit lead him and we see in the book of Acts, God using Peter to spearhead the leadership of the church and using him to do the miraculous. We too are on a journey like Peter of learning to let the Spirit lead us and putting off our tendency to want to lead ourselves.

Adam & Jesus: The Son’s Battle to Kill the Slave

When Adam sinned he sentenced humanity as slaves to sin by choosing to walk in the flesh. When Jesus died He reversed this sentence to once again give humanity the choice to live as free sons and daughters of God. When we talk about being Spirit-led we can easily refer to this in airy-fairy terms, but in context, Paul is literally talking about choosing to put to death sins of the flesh, by choosing to follow the Spirit which results in the fruit of the spirit and Godly living. Throughout the Bible we see numerous examples, including Peter, of people that put off this tendency and chose to be led by God’s Spirit instead of themselves.

How to be Spirit-Led: Living as a Son from the Life of Simeon

Last week I was studying to teach the Gospel of Luke and I was struck by the way this obscure man named Simeon was led by the Spirit to be one of the first to declare that Jesus is God. What allowed to Simeon to be a part of God’s story in this unique way?

Luke tells us that Simeon was “devout, righteous and waiting for God’s Kingdom” (2:26). In other words he was seriously focused on being led by the Spirit of God and we see a great example from this very short exert of Simeon’s life on how to be Spirit-Led:

As we reflect on being Spirit-led we can learn from both Peter when he was young, and Simeon when he was old. Wherever we are in our journey in being more Spirit–led as sons and daughters, may we desire to grow like Peter did and learn from Simeon’s example. May we take courage that like Peter sometimes, we will nail it and sometimes we will blow it, but in the midst of this journey in His grace, Jesus is teaching us to be more dependent on Him and less led by ourselves. May we become more and more sons, and less and less slaves.

As we press on to be more spirit-led may our prayer be that of John the Baptist’s in John 3:30… “More of Him and less of me.”